In 2017, the Kansas City Aviation Department (KCAD) began to prepare an Environmental Assessment (EA) for the new, proposed single terminal at KCI. As part of the EA process, the Federal Aviation Administration (FAA) and the State Historic Preservation Office (SHPO) determined that the terminals, airfield, Airport Police Station and Central Chilling Plant, access and circulation roadways, earthen dam, and drainage control reservoir at KCI were eligible for listing as a historic district on the National Register of Historic Places (NRHP).

Construction of the new, single terminal included demolition of existing Terminals A, B, and C, which would substantially change the character of the historic district, making it ineligible for listing on the NRHP. Therefore, mitigation was required. KCAD, FAA, SHPO, Kaw Nation, Osage Nation, Pawnee Nation, and the Ponca Tribe of Oklahoma entered into a Programmatic Agreement (PA) to govern the mitigation of the impacts from demolition of the existing terminals. The PA is a legally binding document that established the process to ensure compliance responsibilities, and included stipulations such as:

The goal of the Mitigation Commission was to come up with specific creative mitigation options that can be implemented. After the Commission had reached its recommendations those recommendations would be provided to KCAD, FAA, and SHPO to review and comment and approve a final mitigation option. Two mitigation recommendations were approved. First, creation of a website to document the history of the terminals, historic district, KCI, and aviation in Kansas City. Second, programming of a courtyard at the new, single terminal to incorporate and preserve the main themes of the historic district within the overall new terminal project

In October 2018, an architectural and historical property evaluation of KCI was prepared by Architectural & Historical Research, LLC. Based on this evaluation and on input received from the SHPO, the FAA has determined that KCI is eligible for the NRHP as a historic district. This historic district is significant under two criterion of the NRHP: Criterion A and Criterion C. The historic district is significant under Criterion A in the area of Transportation for its association with the Jet Age and with Kansas City’s efforts to retain TWA as a major employer in the region and under Criterion C in the area of architecture as a work of the prominent Kansas City architectural firm of Kivett and Myers embodying distinctive characteristics of the Brutalist architectural style and for its innovative “Drive-to-your-gate” configuration, with a period of significance of 1957-1972.

The boundaries of a KCI Historic District encompass the airfield, the terminals, the Airport Police Station and Central Chilling Plant located in the center of the terminal complex, along with associated access and circulation roadways, the earthen dam, and drainage control reservoir. These buildings and structures form a significant and cohesive linkage that collectively convey the historic and architectural significance of KCI. 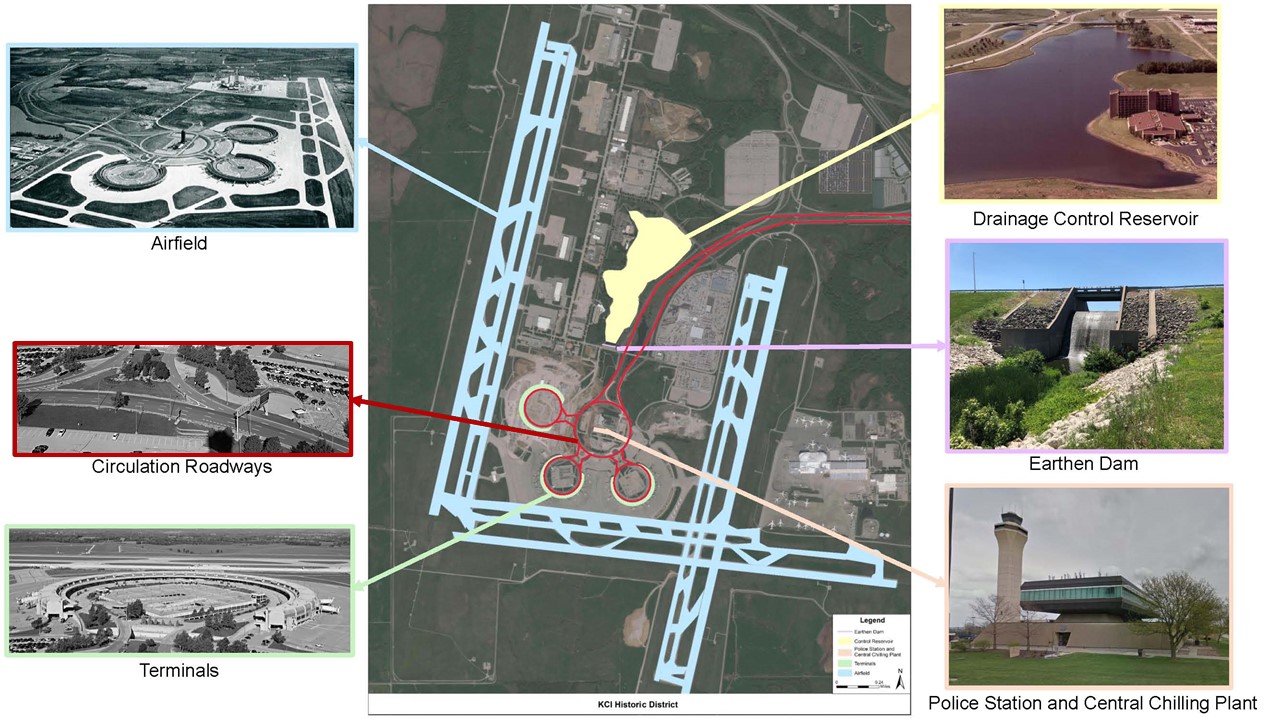