The National Environmental Policy Act (NEPA) is a Federal statute that requires federal agencies to use a systematic, interdisciplinary approach for considering the potential environmental impacts of a Proposed Runway 5L/23R Replacement Project and factoring them into the decision-making process. The Council on Environmental Quality (CEQ) Regulations for implementing NEPA set the standards for NEPA compliance and direct federal agencies to develop their own procedures. Federal Aviation Administration (FAA) Order 1050.1F provides the FAA’s agency-wide policies and procedures for ensuring compliance with NEPA and the CEQ Regulations.

The FAA, as the lead federal agency, initially considered preparing an Environmental Impact Statement (EIS) for the Proposed Runway 5L/23R Replacement Project which originally included relocating and extending Runway 5L/23R, expanding Terminals 1 and 2, expanding the Federal Inspection Station (FIS), expanding the cargo apron, extending Runway 5R/23L from 7,500’ to 9,000’, replacing Taxiway Charlie with a high-speed exit taxiway, constructing a Consolidated Rental Car Facility (CONRAC), and two expansion phases of Park Economy 3 (PE3). Since that time, various project elements of the original Proposed Runway 5L/23R Replacement Project have been eliminated due to the industry and economic consequences of the COVID-19 public health emergency, the applicability of Section 163 of the FAA Reauthorization Act of 2018, and the FAA’s determination that certain projects were independent of the Proposed Runway 5L/23R Replacement Project and could be evaluated under a separate NEPA document.

Currently, the Proposed Runway 5L/23R Replacement Project consists only of replacing Runway 5L/23R with one of the same length and enabling actions such as road relocations and taxiway development. Based on these developments, the FAA agreed to first conduct an Environmental Assessment (EA) to determine whether an EIS is necessary, rather than proceed with an EIS from the outset. The FAA conditioned proceeding with an EA as long as: the Proposed Runway 5L/23R Replacement Project does not include construction activities near the William B. Umstead State Park; the FAA has discretion to determine the appropriate level of public outreach; and the FAA remains actively involved throughout the development of the EA. Therefore, the FAA will assist and provide oversite in the development of the EA and will assist the Airport Sponsor in determining the appropriate level of public outreach for the EA. 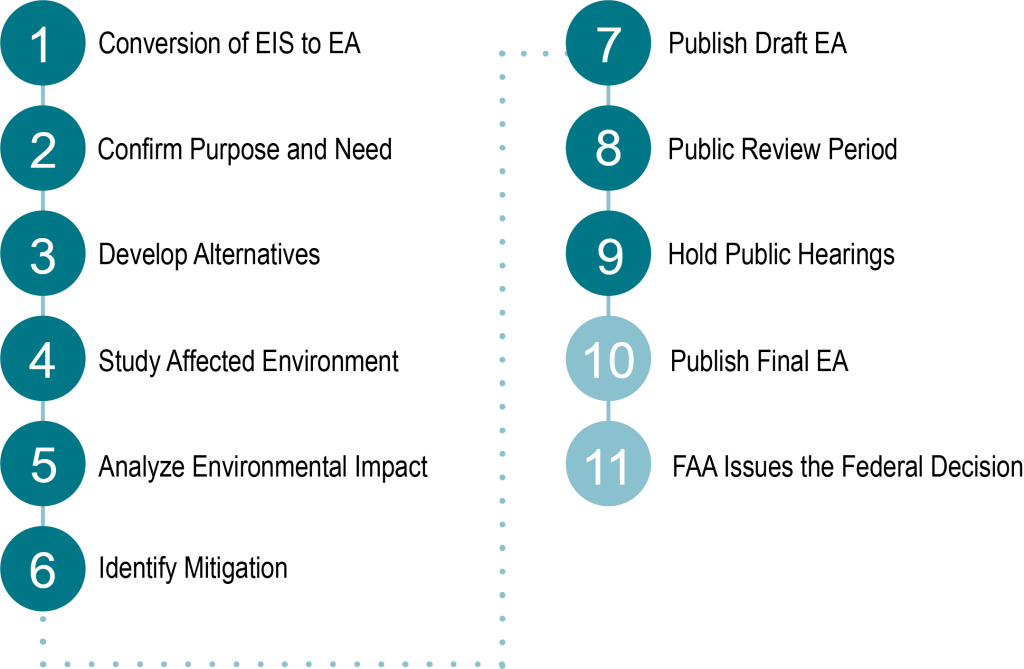 Interested parties will have several opportunities to provide input and comments during the Environmental Assessment process. For more information on how to provide comments, see Public Participation.

Enter your name and email and click register to request notifications throughout the Environmental Assessment process.

If you have questions or need further information, please contact:

Photos on this site appear courtesy of Raleigh-Durham Airport Authority