This edition of the L&B Lab Weekly updates an issue previously published in early April. The focus of the article was to estimate both the near- and long-term impacts from COVID-19 on the aviation industry. L&B leveraged ourexperience and data from China as the first country to emerge from the crisis and the history of previous industry setbacks to understand how markets globally might be impacted.

Our April article concluded that air travel demand going forward will be closely tied to consumer confidence as it pertains to COVID-19 and the safety of air travel. Our other key findings in April included:

What have we learned since April?

It is becoming clear that different countries are taking one of two approaches to managing the pandemic. The first approach focuses on achieving a zero or near zero case rate and then enabling freedom of movement in their domestic spheres. New Zealand is a notable example of a country achieving this goal. Other countries that have adopted this approach include Australia and China. The second approach is more of a balancing act between keeping infection rates low enough to be managed by the health care system and enabling most economic activities to resume. Notable examples of this second approach are the United States, Sweden, and Germany. All three countries imposed initial lockdowns to reduce the load on their health care systems, but now are in the process of restarting their economic activities despite a continuing volume of new cases. In each case, their health care systems have the capacity to handle infected people.

The travel and tourism industry, which in 2019 accounted for 10 percent of the global economy, is now a leading indicator for the recovery from the corona virus collapse.

The United States Transportation Alliance   Travel Intentions Pulse Survey completed in early May indicates a 60 percent of passengers  will be eager to travel for leisure once COVID-19 is contained, an increase of  54 percent from the previous  month..

Experience from China, , as a country emerging earlier from the pandemic,  has shown that tourists intend to travel as health concerns are addressed. The sell out of Shanghai Disney, at 25 percent capacity, in just a few minutes is indicative of confidence in traveling. Another non-travel related piece of good news is  automobile sales in China are back to pre-COVID-19 levels. Finally, Starbucks is reporting that  China sales are already back to 80 percent of pre-COVID-19 levels. The Chinese economy appears to be coming back quickly. 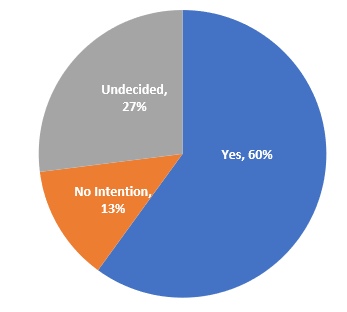 As shown in the pie chart above,  a recent Pacific Asia Travel Association survey of over 1,250 citizens across 23 Chinese provinces demonstrated 60 percent of respondents indicate that the public  would consider traveling in 2020 if COVID-19 is effectively controlled; however,  27 percent surveyed noted being undecided. Only 13 percent indicate that they wouldnot  travel. Tied to these trends, at the end of April, 87 percent of hotels in China are openwith an occupancy rate of 30 percentan increase from 10 percent in February, which corresponded to their COVID-19 peak.

Finally, China Eastern Airlines recently announced  plans to fly 60-70 percent of their normal schedule in June 2020, after bottoming during the peak COVID-19 months of February-April. Based upon these trends, arguably China Eastern’s capacity could be near pre-COVID-19 levels by late 2020, although it is expected that load factors would be lower.

COVID-19 has been more widespread in the U.S., with most states only recently “opening up.” As such, a key air travel consideration will be how COVID-19 spreads and how this will affect the American trepidation to travel.  There is a parallel between near- and long-term business confidence and intentions to travel.

Propensity to Travel by Trip Type by U.S. Geographic Region

The region most impacted by the pandemic in the U.S. has been the Northeast U.S., while regions in the South and Midwest have been less affected. The chart above of travel intentions shows that consumer confidence to resume travel is lowest in the regions of the country that have had the highest volume of COVID-19 cases.

Currently, airline business confidence is low, but there are some encouraging signs. U.S. airlines are now indicating  an uptick in booking activity and are experiencing load factors in the 30 to 40 percent range, up from single-digit load factors as recently as in April. TSA checkpoint traffic has also been trending higher. Airlines are indicating that improved traffic demand is being driven by leisure travel demand, specifically visiting friends and relatives traffic. Selectively, airlines are even adding back some longer-haul flights. In Europe, Ryanair recently announced  they believe they can operate at 50 to 60 percent load factors this summer. Still, there is a long way to go.

Of the US airlines, Southwest has been the most aggressive with maintaining flown seat capacity, in large part due to having lower fixed costs/debt than the competition. Southwest has indicated that they are burning through roughly $25 million per day, while Delta and American have a daily burn of $50 million and $70 million, respectively. These burn rates will have a bearing on future outlook once the stimulus from the Cares Act ceases at the end of September in the USA.

More recently, U.S. airlines have become more optimistic. As an example, American now plans to fly July at 55% of pre-COVID levels, while Southwest is indicating that they plan to fly at or near pre-COVID capacity levels by year-end. This is much more aggressive than just two weeks ago. In general, leisure travel demand, particularly to outdoor destinations such as beaches and parks has been the strongest travel segment, as bookings continue to show improvement since bottoming in April. In general, ULCCs have been particularly optimistic, as noted by recent commentary from Allegiant Airlines:

“We are continuing to see material improvement in demand from April lows.”

United and Delta have been the most conservative about adding capacity back, as they appear more focused upon corporate travel demand, which continues to lag.

Over time, national approaches to containing the coronavirus and restarting national economies will see the eventual restoration of the travel and tourism industries. Domestic traffic will return faster than international. Short-haul international travel to neighboring countries with similar recovery progress and outlooks will occur ahead of longer haul travel. Several countries are currently exploring travel bubbles with countries with low or no reported COVID cases in recent weeks. Examples of countries looking to resume cross-border travel include the Baltic nations of Lithuania, Latvia and Estonia, and Australia, New Zealand and the Pacific island nations such as Fiji. Leisure traffic will return first, with visiting friends and relatives traffic generating early growth and more vacation travel taking place as tourism markets “open up.”

Airline hubs, in the short-term, will look different:

The initial results from China indicate that Chinese airlines will operate near full schedules within nine months of reaching their lowest passenger and flight volumes. It is expected that air traffic demand will bounce back to 2019 levels faster for developing markets or markets with a large domestic network compared to mature markets.

U.S. airline capacity has been slowly building following a pattern similar to,but  slower than the Chinese airlines. Depending on the success of vaccine development and rapid containment of new virus outbreaks, it may well take one to two years to achieve normal flight schedules in much of the world.